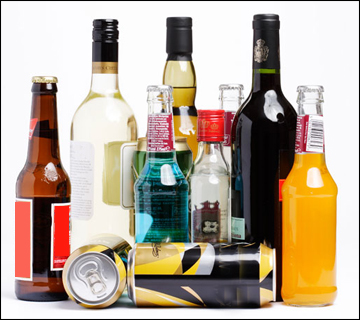 The Bible says, "Wether therefore ye eat, or drink, ... do all to the glory of God." [ 1 COR 10:31 ] Among the other popular poisons which are imbibed by modern man, one that is particularly pernicious and destructive is alcohol. Glorified as a symbol of gracious living, it has, in fact, been the most malignant social disease known to civilization.

In these days of comprimise, most of the great religious bodies have changed their attitude towards social drinking. From total abstinence they now take a stance of moderation. In essence this is exactly the same position the brewers take -- no drunkenness. But is that a safe posture to take toward alcoholic beverages? Statistics reveal that one out of every ten that start drinking become either alcoholics or problem drinkers.

Beer commericals show the party and the fun. They don't show the hangovers, the sick feelings, the dizziness, the pounding headaches, the rejection the body goes through, the brain cells that die, the stupidity and obnoxiousness of someone who's had too much, the smell which resembles horse urin, the people who have wasted their lives into nothingness, those victims which have been mamed or injured by irresponsible drinkers who drive, those girls who get pregnant due to lowered ambitions or who have just passed out and were taken advantage of. There's a dark side to drinking, and many people just close the door and turn their backs -- it can happen to 'me.' If you ever stated part of the following sentence, "I don't think I could .... without a drink" or "In order to .... I need a drink." Whether its study, relax, socialize, whatever ... there is a place where something is the possibility of taking a stronger hold on you.

The claim is mande by many Christians that the Bible endores moderate drinking of alcohol. This is based largely on the use of the term "wine" in the Scriptures. But the recommended wine of the Bible is not alcoholic. The word wine is used for either fermented or unfermented drink. God declared, "As the new wine is found in the cluster, and one saith, Destroy it not; for a blessing is in it: so will I do for my servant's sakes, that I man not destroy them." [ ISA 65:8 ]

This wine in the cluster has to be the fresh juice of the vine. This is the only kind God ever declared to have a blessing in it. There is no blessing in the intoxicating (toxic?), befuddling bottle of fermented poison. "Wine is a mocker, strong drink is raging: and whosoever is deceived thereby is not wise." [ PRO 20:1 ] "Look not thou upon the wine when it is red, when it giveth his colour in the cup, when it moeth itself aright. At the last it biteth like a serpent, and stingeth like an adder." [ PRO 23:31, 32 ]

Did Jesus go contrary to the Old Testmaent and turn water into alcoholic wine? It is unthinkable to think that He should do so. He obeyed the Word of God. The wine He created was the unfermented kind. [ see the Greek ]

Research has proven that intoxication is caused by a process which deprives the brain of oxygen. This deprivation destroys brain cells, affecting, ultimately, the reasoning powers of the conscious thought. And wasn't it the free will and choice to make one's own decisions that the non-believer craves, before he fully understands God's intentions, and that drink is slowly robbing him of it?

On the assumption that people of Bible times could not have preserved grape juice for an extended period of time in the warm climate of Israel from the time the grape harvest until the Passover in the spring it is taken for granted that Jews celebrated the Passover with fermented wine. This assumption is unwarranted. throughout the ancient world juices were often preserved in an unfermented state for extended periods of time through various methods. One method was to concentrate the juice to a syrup by boiling it. Stored in a cool place, this concentrate would not ferment. simply diluting it with water yielded a non-alcoholic "sweet wine."