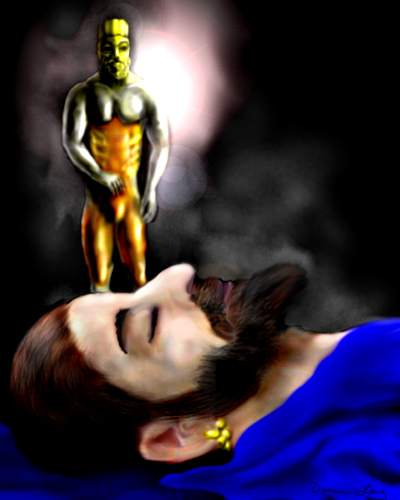 Chapters one and two of Daniel deal with a dream that Babylon's ruler, King Nebuchadnezzar, had one night. A dream the king knew was very important, but he could not recall when he awoke.

Here it gets funky, the king calls his wisemen around and does what any king in such a postion would do. He orders his wisemen to tell him what the dream was and what it meant, and of course, none could. These "unwise" individals disappointed their king and faced imminent death.

The king was irate. So he commanded that all wise men be killed. The king's guard went to find Daniel, and Daniel found out about the King's hasty decision. Daniel, who supposedly could interpret dreams, went to ask the king for a shot at it. He prayed to God for the dream and to tell him what it meant, and that evening the dream and its meaning was revealed.

It would seem much simpiler to give Daniel the dream in the first place, and have him relay it to the King. However, it may have been difficult to get an audience with the king if you're in captivity. Also, by having the Kind have the dream, it made it a very personal and real experience for him. ...the kind of experience one would pay attention to.

The next day he went before the king... Daniel told the king that he beheld a great image [statue], an image whose head was of fine GOLD, its breast and arms of SILVER, its belly and thighs of BRASS, the legs were made of IRON, and its feet made of PART IRON and PART CLAY. Then there fell a STONE from out of the heavens that smashed down upon the feet of the image. [DAN 2:31-35]

The great king was extremely pleased with Daniel -- he was right. That was indeed the dream, but what did it mean?

Daniel went on to explain just what this image meant. The head of GOLD represented Nebuchadnezzar's kingdom of Babylon, the SILVER represented another inferior kingdom, then a third kingdom of BRASS, and a fourth kingdom as strong as IRON. Finally there shall be separate kingdoms that will not unite, and then shall God in heaven set up a kingdom that will last forever. [DAN 2:38-45]

Daniel was born around the year 622 B.C. and lived to be about 87. Daniel was taken captive to Babylon in 606 B.C. So we can gather the book of Daniel was written a little before the year 535 B.C. The first chapter of Daniel has been dated at 607 B.C., which fits our criteria from above. The second chapter in 603 B.C., the third in 580 B.C, the fourth in 570 B.C... and such. The last chapter, chapter 12, has been dated to 534 B.C. So it fits his life span. The book contains two parts, history and prophecy. Many people, in their haste to quickly unravel the prophecy, skip over the historical section. The stories of Daniel are not given simply as stories; rather they illustrate what the prophecies predict.

Even more importantly, the book of Revelation was written by John, one of Christ's diciples, in 96 A.D while he was imprisioned on the isle of Patmos. Much evidence supports that the John who wrote Revelation was the same John that was a disciple. John was not a common name back in the first century, so there weren't that many to get confused with. Other factors from writing style, time frame, descriptions, etc. can be used to confirm the authorship.

Well over 600 years of time span the writing of these two books, yet Daniel is the primary key to unlocking Revelation. We will examine Daniel, and then use those results in opening Revelation for current day prophecy.

Keep in mind this was written as prophecy, and history verified it has happened. Babylon flourished from 605 B.C. to 539 B.C. -- then there was Medo-Persia from 539 B.C. to 331 B.C., followed by Greece from 331 B.C. to 168 B.C. Rome was the "iron" kingdom that ruled the world from 168 B.C. to 476 A.D. with a cruel iron grip. Then, from 476 A.D. onward, the nations have remained separate and divided. They are supposed to stay this way until the Lord comes. So if they don't stay separate and do unite before Christ appears on the scene, then this one would be wrong -- and the Bible would be invalid. However, as things stand, this one does look like it is verifiable and definately correct.

God had spoken of Babylon as a golden city a hundred years before. [ISA 14:4] Through Jeremiah God called Babylon a "golden cup." [JER 51:7] Even historians refer to Babylon as the "Golden City of a Golden Age." And in 538 B.C. leading hordes of Medes and Persians, Cyrus the Great swept out of the mountains of Persia and captured Babylon. [DAN 5] A year later and Babylon was no more.

Medo-Persia used silver as a medium of exchange and in decorations. This time Alexander the Great at Arbela in 331 B.C. passed control of power to the Greeks.

The Greeks, with their brazen armor and brass breastplates worn by soldiers are represented by the brass thighs of the statue. With them came culture, learning, and the Greek language that later helped the spread of Christianity. After the death of "Alexander the Great the nation began to lose its power and unity. By 168 B.C. the growing strength of the Romans became too great for the Greeks to withstand.

The iron monarch of Rome broke into pieces, bruised, and subdued kingdoms for nearly 600 years. During its rule, Christ was born and was crucified, and, under Rome, Christianity took root and thrived in spite of many persecutions.

Hippolytus, a great theologian who died about 236 A.D., wrote of Rome: "Rejoice, blessed Daniel! thou hast not been in error.... Already the iron rules." And Gibbon wrote: "The arms of the republic,... always victorious in war, advanced...; and the images of gold, or silver, or brass, that might serve to represent the nations and their kings, were successively broken by the iron monarchy or Rome" (The History of the Decline and Fall of the Roman Empire, 5-vol. ed., Vol. 3, p. 365).

Broken up by the invasion of barbaric tribes of Europe, the Western Roman Empire was overrun at last. Out of its ruin emerged the nations of modern Europe: Saxons (English), Franks (French), Alemanni (German), Burgundians (Swiss), Lombards (Italians), Visigoths (Spanish), Suevi (Portuguese), Vandals, Ostrogoths, and Heruli. Many attempts have been made to unite Europe through the centuries. Popes tried to cement it together under the church. Before World War I most of Europe's ruling families were related by intermarriage ("they shall mingle themselves with the seed of men"), but this, too, failed. Hitler was only the latest of a series of military conquerors who tried and failed. The prophecy said, "They shall not cleave one to another." And that's the way things have remained. Even today hope flares for unification through the Common Market. ...care to place any bets?

Daniel saw that the stone would smash down upon our modern-day earthly country-kingdoms and obliterate them. The entire symbolic statue was shattered to pieces. That stone was no ordinary stone; it was a stone cut without human hands. It was cut and formed of God. The stone smashed the great statue, then it grew and spread over our entire planet. [DAN 2:44-45]

This part of Daniel's vision symbolized the 2nd coming of our Lord Jesus Christ. And when will it happen? Unfortunately, it will be "as a thief in the night" -- because most people will not be expecting it, says the Bible. Many will ignore the Bible's prophetic warnings. The actual date of the coming is unknown, and supposedly will never be known. However we have been given a list of events that will take place before the second coming happens. By looking at this list, we can tell how far along we are.

Incidently, Nebuchadnezzar had been greatly impressed with Daniel and "Daniel's God." But he soon returned to idolarty and set up a golden image on the Plain of Dura. [DAN 3] Three of Daniel's friends refused to bow down to the king's great golden image and consequently were thrown into an overheated furnace. The king watched, furious that they dared defy him. Suddenly he paled at what he saw in the firey furnace: four men, not three, -- one who looked like the Son of God. All four where in there, and when the three emerged none were hurt by the heat, nor did their clothes smell of smoke when they emerged.

The three men didn't know that God would deliver them. But they trusted Him. And whether He spared their lives or not, they would not disobey Him. They honored God, and in the crisis He honored them. According to God, those who obey God will face a similar test in the future ragarding worshiping the image of the beast. (We'll now have to figure out what 'the beast' is.)

It also is amusing to note that the gentlemen were seen walking around in the fire. An easy way of accomplishing this would be a manipulation of dimensions which fits into the realm of possibility we previously explored. Remember the span of dates between Daniel and Revelation? From Daniel 10:5,6 describing the fourth man in the fire and the being who appeared to John in Revelation: