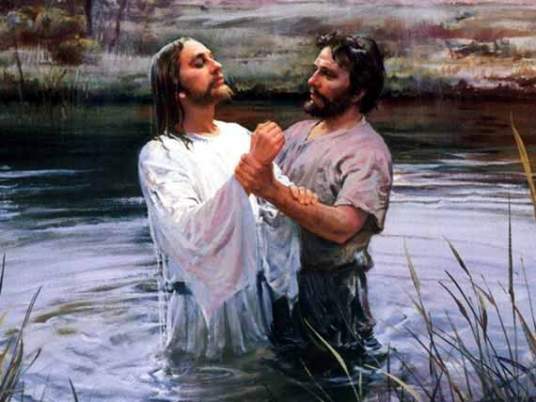 How important is baptism? It's very important. Baptism in itself doesn't save you, only grace does, but we need to look at what baptism is all about.

Christ told His diciples to "go and teach all nations, baptizing them," and in Mark 16:16 He said this:

Jesus did not said water baptism is essential for salvation. It is a public acknowledgement of your following of Christ. The thief on the cross publically admitted to Christ that he believed, and Christ did not say "well we better hop down off these crosses and get you baptized, quick."

Our Lord's cross, which all realize is of inestimable importance, is mentioned 28 times in the new testament, but baptism is mentioned over 100 times. Certainly we can't treat it as non-essential.

It is important to understand that we don't get baptized to get salvation, but rather we are baptized because of salvation. Just as in "take to asprin for a headache", the key is with the word 'for'; we aren't taking the asprin to get a headache, but rather because we have one. Baptism is the natural progression of salvation.

"Baptise" comes from the greek work BAPTIZO which means "to dip, submerge, or immerse." This was the form used with Jesus, and full-immersion is the proper form of baptism. Why? Because it symbolizes Christ's total burial in the tomb and His resurrection up out of the grave -- for a Christian it means you begin a new life in Christ, your old life is burried in the water, and you begin life anew in God's eyes. [ROM 6:3-4]

"To dip," appears three times in the New Testament, in each instance reflecting the meaning "to submerge." In the parable of the rich man and Lazarus, the rich man requested Lazarus to dip the tip of his finger into cold water and bring a drop to moisten his tongue. [LUK 16:24] On the night before the crucifixion Jesus identified His betrayer by dipping a morsel and handing it to Judas. [JOHN 13:26] And when John in vision saw Jesus riding forth as the commander of the armies of heaven, Jesus's garments appeared to John as though they had been dipped in blood. [REV 19:13]

Accordingly "sprinkling" or having water poured on you is not proper baptism.

Man can perform no act in God's eyes in which man, by himself, can "earn" his own salavation -- we must accept Christ's free gift of grace, we must wear His "robe of righteousness."

If we accept Chirst and are baptized, we become spirtual descendants of Abraham and are "heirs to the promise." [GAL 3:29] At this point we receive not only forgiveness, but power to overcome all "sin." This doesn't say we will do so, but we will know when we are doing something sinful and will have the choice to proceed or not. Often, we slip and sin anyhow, taken by the moment. Recognition of this and acknowledgement is part of the repentance process, where we ask forgiveness based upon the sacrifice made at the cross. From that point, we leave the sin at Jesus's feet because it has already been paid for.

By partaking of God's grace and divine nature, our lives become fortresses against Satan and sin. Baptism begins a glorious walk of victory "in Christ."

Perhaps the biggest mistake most Christians make is that they don't feel any different after their baptism. Or shortly thereafter they sin and feel imperfect, or that they can live up to God's expectations. Baptism is symbolic of our choice, and we start to grow then. A parent does not demand of a child who is just born to immediately start walking. While we have the ability to completely overcome sin at that point if we followed Christ 100%, in reality we will not do so until we enter heaven (where we receive new bodies and are away from the tainted exposure of sin and the environment that develops from it).

Many people who would like to get closer to Christ wait on baptism not knowing when the time is right. They try to get perfect first. Christ is only as far away as you push Him...

If you believe God is The Creator, that He sent His only Son, Christ, to earth and that He died and paid for your sins, then get baptised. From there on, learn, study, and grow. You don't have to have a college diploma to be qualified to enroll in kindergarten.

While we are fogiven of our sins, some may think that entitles us for a free-for-all. We can sin all we want, and because we are forgiven, it doesn't matter. Wrong.

Accepting God's grace does not give man the freedom to commit willful sins [ROM 6:1-2] and grace does not negate the ten commandments. When we sin, we are to reflect upon it, and not make promises that we can't keep like "I'll never do it again," rather we recognize our mistake, and ask forgiveness from the heart.

"The Law" points to sin so we can identify "sin." If a person totally refuses to turn away from a personally cherished sin, that person gradually becomes hardened in trasgression. Finally the spirit of God finds no response in that heart -- this condition is called "the unpardonable sin." You deliberately sin, start to not even recognizing it as sin, and never repent for it.

We must: 1) recognize our sins, 2) confess them (not to a priest, but in prayer directly to God), 3) accept Christ's atoning death, 4) begin a life of obedience in the Lord.

..in doing so, we are "saved." Even when we disobey, we are loved, and that is why we turn to Christ with our problems. God's not sitting on a throne with lightning bolts ready to blast us to pieces; rather he is giving forgiveness to those who ask.

It is Satan who makes us think our sin is so horrible that we dare not show our face toward God and that we should hide or deny it.